The Travels of Natural Gas

It’s dark in there. Luckily, you don’t need to breathe because there isn’t any air to speak of, just a lot of methane plus some carbon dioxide, butane, ethane, propane, pentane, nitrogen, hexane, heptane and water vapor. You and the other gas molecules have been in this one spot for a very long time – millions of years, in fact.

You’re cozy and content in your little home. Then one day, out of the blue, you hear a loud roar and whoosh! – you’re sucked up through a well and into a huge pipeline.

You and your little gas buddies are pumped through this pipeline to a processing plant. There, you say goodbye to the water vapor, carbon dioxide and other molecules considered impurities. These are removed in a treatment process called “sweetening” the gas.

Next, you are pumped into a network of steel transmission pipes that range in size from 20 to 42 inches in diameter. If you could make a sound, you would probably be able to hear it echo inside these big pipes.

You and the other gas molecules are tightly packed together now, and you feel as if you are being pushed quickly through the pipes from behind. Compressing a gas reduces its volume, so many more of you now fit into a smaller space. Not much elbow room left, so it’s lucky you don’t have elbows!

A Fork in the Road

You continue traveling through the pipeline until you reach a fork – a place where the pipe splits off in different directions. Some of your friends are sent down one fork of the pipeline to distribution companies, where they are put into storage tanks for future use. The rest of you move on to a natural gas utility – a company that delivers natural gas to homes and businesses.

Once you reach the gas utility, your pressure is reduced and a chemical called mercaptan is added to you. You had no odor before, but now you can barely stand your own smell. Mercaptan contains sulfur and makes you smell like rotten eggs. It’s added so people will be able to tell if natural gas is leaking from their natural gas pipes or appliances.

From the gas utility, you travel through small pipes called distribution mains. These pipes are between 2 and 24 inches in diameter and run below the streets. You zip along under the street, hearing the rumble of traffic overhead.

All of a sudden, the pipeline you were in gets smaller, and smaller again. Now you are in a service line that leads from the distribution main to a house. You are about to go through a gas meter! You’re about to be used in someone’s home! The gas meter measures the amount of gas used in the home, just as an electric meter measures electricity usage. The gas company uses this information to figure out how much to charge on people’s gas bills.

Before entering the meter, you go through a gas pressure regulator where your pressurization is reduced. Then, you whiz through the meter and into gas lines—pipes that are an inch wide or less. You can relax a little now, because you’re not under as much pressure. But you continue to bounce around with excitement, eager to find out which appliance you’ll serve. Will it be the gas range in the kitchen? The gas clothes dryer? The water heater? The furnace? Whichever it is, you hope you’ll be put to good use.

Gas at Your Service 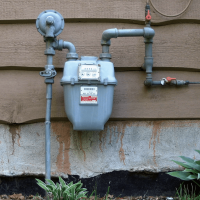 Natural gas is always waiting in your home’s gas pipes to be used. When you use a gas appliance, a valve opens that lets natural gas flow through the pipes into the appliance where it is needed.

For example, when you use a gas burner on a range top, natural gas flows from the gas line up to the burner. A pilot light (a small flame or spark) ignites the gas. Then, as you turn the knob, you let more gas flow, which makes a bigger flame, or less gas, which makes a smaller flame.

< Back to Natural Gas Safety World
Onward to the next section! >